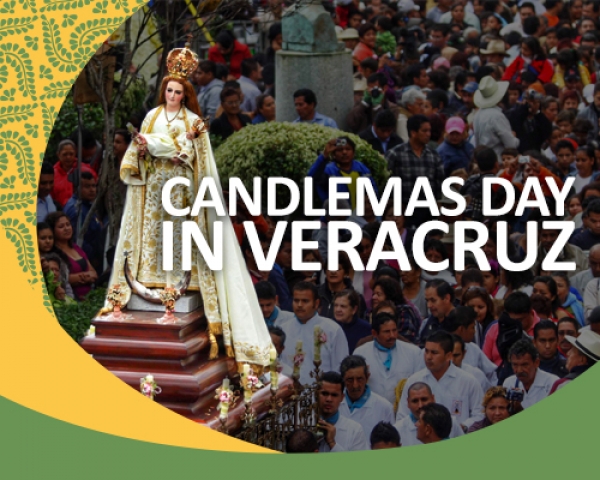 Tlacotalpan (From the Nahuatl language meaning “place between the rivers”), is a World Heritage City in Mexico and is possibly one of the prettiest towns you could ever hope to stumble upon; located on the banks of the Papaloapan River, it’s located approximately 50 miles SE of the city of Veracruz.

The Fiesta de la Candelaria enjoys a special celebration in this colourful little town — discover with us an incredible multi-day event that occurs from January 31st through to the 9th February! Interestingly, February the 2nd, not only celebrates Candlemas (Or the Presentation of the Lord) here, but also the beginning of the annual sowing period or “Atlahualo” of the ancient Aztecs who on this day, payed homage and prayed to Chalchiuhtlicue (their goddess of the lakes and seas) whilst walking alongside the river to gain her blessings for a fruitful harvest in the year ahead.

On January the 31st, the Cabalgata Magna marks the beginning of the Candelaria celebrations in this beautiful state of Mexico. A horseback procession makes its way through the streets of the town, headed by a captain, a lieutenant and a colonel. All the women who ride in this stunning parade prepare their jarocha dresses months in advance in order to be ready for the big day. The men dress in white with a red paliacate (bandana), and a sombreo de cuatro piedras (hat of four rocks), while the women wear beautiful white flowing dresses with black aprons and rebozos (shawls) often with their hair adorned in colourful ribbons and flowers in their hair. During the night-time the Plaza de Doña Marta comes alive with live music from jareneros and an Encuentro (a staged event where different groups from all over the state come to play their unique musical styles, whilst poets show off their Decimas (poems of 10 lines that are spoken with dramatic overtones to the background of the Jarocho music). Finally, around 11pm, the parque comes along with Fandango dancers, who often dance the whole night away into the early hours of the morning.

On February 1st the city celebrates with El Corrido de Torros, or running of the bulls; a 240 year old tradition in which cattle herders and cowboys herd bulls throughout the streets of the town, down to the river to swim to the other side (Please note: although nowadays the festival is a lot more animal friendly than in years gone — the bulls now get a boat across & there are veterinarians available — this may still be a sensitive experience for some pilgrims).

However, more than anything, Tlacotalpan has long been renowned for its unique celebration of the feast of the Presentation of the Lord, referred to as Dia de Candelaria (Day of the Candles) on the 2nd February. In this little Jarocho town, instead of the customary procession of the statue of Mary through the streets of the town, here the procession takes place mostly on and across the river, accompanied by hundreds of colourfully decorated fishing boats, lanchitas (motorboats) and the obligatory serenading mariachi bands that perform from the boats and the riverside. Thousands of well-wishers and Marian devotees follow along within rented boats and line the banks of the Papaloapan river in order to pay homage to their beloved Señora de Candelaria, the patron saint of the town.

The adult-sized statue of the Virgin that crosses the Tlacotalpan River in the modern-day, was a gift to the people of the town from the Spanish hacienda owner Pascual de Ovando Rivadenyra in 1776 and originated from Cataluña in Spain. The procession is said to have come about when the friars of the Order of San Juan de Dios began to propagate their Candelaria celebration here - the celebration now starts on the 31st January through to the 9th February with various different traditions, foods, festivities and even musical concerts, theatre and traditional dance productions to enjoy each day. We invite you to come and partake in this incredible celebration with Tours Peregrinos Mexico.

Please don’t hesitate to contact us if you are interested in booking a group for next year’s event.