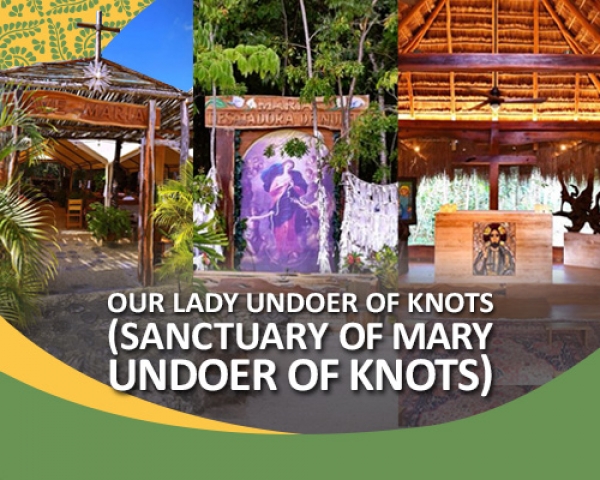 FIRST SANCTUARY IN MEXICO: OUR LADY UNDOER OF KNOTS.

The devotion, love and faith that is so evident in Mexico’s Catholic traditions is easy to see, as it manifests itself in every part of this beautiful country. Nestled in the mayan jungle on the outskirts of Cancun, there is a hidden gem where one can discover one of the first shrines dedicated to Mary Undoer of Knots (in German, Maria Knotenlõserin).

Mary Undoer of Knots was originally featured in the famous painting by German painter Johann Georg Melchior Schmidtner (1625-1705), who created the work on commission, in thanks to the grandson of Wolfgang Langenmantel & Sophie Imhoff who received Mary’s grace and blessing; ultimately saving their marriage which was in deep crisis.

The painting has previously been on display in the Perlach church, in Augsburg, Bavaria (Germany) where Pope Francis was visiting as a student, took note of the painting and later promoted her veneration in Latin America.

Mary untied the knot(s) that had formed in the relationship of this 3-year marriage between Wolfgang & Sophie, which thanks to her intercession, ended eventually in a unified and happy lifelong relationship.

That is how Mary became the patron saint of marriages and marital difficulties, as well as bringing order to all family conflicts and interpersonal relationships which may otherwise seem hopeless.

“She looks over each one of her children with tenderness, patience, and supported by the angels of God and the Holy Spirit, she unties the knots in our lives, especially those that threaten to draw us away from God and our family."

In this serene place of natural beauty and faith, the union with Mary becomes palpable, the heart of her Divine Light illuminates and your faith becomes enlivened and refreshed. The Sanctuary here is fused, at one with the surrounding natural charm of the Caribbean’s virgin jungle. An ideal place to get away from the hustle and bustle of Cancun.

Tours Peregrinos Mexico, invite you to discover more at: http://www.desatadoradenudos.org/