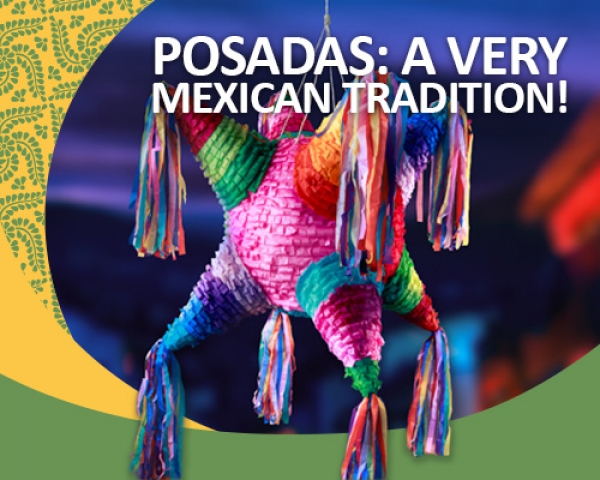 In Mexico, starting from the 16th December to prepare for the arrival of Christmas, communities around Mexico hold “posadas” to celebrate and remember the pilgrimage of Mary and Joseph to Bethlehem where they asked for asylum for one night; the night on which our Lord, Jesus was born.

Most of the modern-day Mexican traditions stem from the time of the Spanish conquest, but many native Mexicans at that time performed rituals to mark the arrival of the God of War; Huitzilopochtli, in their month of panquetzaliztli (which roughly works out to be the month of December that we recognise today - from the 7th to the 26th). The friars who came began to change these rituals for festivities called "aguinaldo masses" where they began to teach the Catholic religion through representations and stories of the birth of Jesus, during which they gave small gifts to all the people who attended; now famously known as the "aguinaldos". All this was done in the churches and the events were open to the whole community.

With the passage of time, the way of celebrating a posada has changed, more religious elements have been included as years have gone on; songs and hymns for the season, piñatas (where the 7 peaks refer to the 7 deadly sins), candles, lights. Posadas are now often held outside the churches and now people organize their posadas in their neighbourhoods, houses and workplaces. Little by little this tradition has grown throughout the country, each locality creating its own beautifully unique version.

After the Mexican Independence, the posadas were being organized among neighbors in various towns and cities across the country, the neighbours passing each house after another with images of Mary and Joseph to ask for a “posada” at each one.

Today, this beautiful tradition continues every year; celebrated in homes, streets, workplaces and churches alike, and as you may expect, each is usually accompanied by delicious Mexican dishes such as donuts, corn, tamales, fruit punch and many others. This, similar to many of the other beautiful traditions of this country, allow us to see the family union and community celebrating together to share good wishes & blessings for the birth of Jesus. In Tours Peregrinos Mexico we have made it our mission for pilgrims from all over the world to come and experience these unique and meaningful traditions in this magnificent country. We invite you to allow us to take you and your group to see and experience the incredible faith and Catholic devotion that makes each celebration here truly unique.